Customers are gaining more and more influence over the energy system. By far the largest number of our customers still purchase gas and electricity. But a rapidly growing number are now switching over to renewable forms of energy such as solar, wind or biogas. Our challenge is to facilitate this move towards local energy generation, while maintaining a highly reliable infrastructure at the lowest possible costs for everyone.

Number of feed-in installations at our customers1

A flexible approach to energy

The transition to new forms of energy means that we need to renew our services to facilitate our customers as best we can. More effective matching of supply and demand is vital to help the electricity network cope with the acceleration in renewable generation and electrification. The increased local generation of wind and solar power poses formidable challenges for the electricity network. Sudden power peaks, for instance, can overload the local network. The availability of electricity is also less predictable, as solar and wind energy are prone to fluctuations.

In the year under review, we initiated various experiments to test new services in partnership with customers. One example is the flexible charging of cars. Batteries charge faster in off-peak hours than at peak times, and off-peak charging reduces the load on the network. In Heerhugowaard we trialled a new flexible model for matching supply and demand in the energy market. And in Rijssenwoud, 35 households are taking part in a year-long pilot to test a neighbourhood battery for local electricity storage.

A new wind farm can be seen along the motorway in the north of Nijmegen. The initiative was taken by a group of citizens who joined forces in an energy cooperative. The members and donors act as co-decision makers and co-investors. They also enjoy the benefit of 100% green power. The construction of the wind turbines started in April and the wind farm was completed in November. The wind farm is expected to yield energy for 8,900 households. Alliander has assisted in realising the project and finding the most effective energy supply method. One option is cable pooling, which involves the transmission of solar and wind energy through a single cable. This mode of supply is more efficient and cheaper. 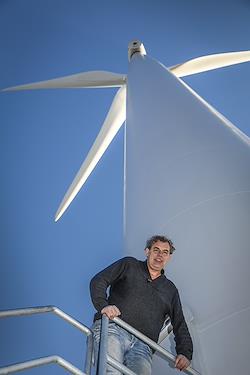 Wind farm of and for residents

In 2016, four wind turbines were built in the Betuwe region to the north of Nijmegen. That, in itself, is nothing special. What is interesting, however, is that the owner and developer of this wind farm is a residents' cooperative. Project manager Pim de Ridder: “Passing over the control of our energy system is something I firmly believe in.”

The idea for the Nijmegen-Betuwe wind farm is certainly not new. A plan for the erection of nine turbines was already on the drawing board back in 1996, but it was never realised. With Nijmegen embracing new climate ambitions after its nomination as European Green Capital, the plan was revitalised. A group of citizens set up a cooperative and approached the municipality. “Wind turbines are part and parcel of climate ambitions,” says De Ridder. “We re-submitted the plan on 6 December 2012.”

The wind farm is expected to deliver energy to 8,900 households. The five wind turbines will be owned by the cooperative: by the local community in other words. They will be producing their own 100% green energy. “Passing over the control of our energy system is something I firmly believe in. The enthusiasm for the project was massive from the start. The interest in Nijmegen wind shares surpassed expectations.” To become a member, residents had to take a financial stake. “That is how we raised the capital for the wind farm and were able to start building in 2015.”

The wind farm officially came on stream on 1 November 2016. The fifth turbine is currently being developed. And there are more plans, says De Ridder. “This project has given us a taste for more. Together with Liander, we are looking into what else can be done in the context of this project. Solar energy could still be fitted in, for instance. So we are now exploring ways of connecting solar and wind to a single cable.”

By making the built environment energy neutral, we can make a major contribution to the achievement of the CO2 objective. But that is a huge challenge. Alliander has therefore joined forces with housing associations and builders in a zero energy initiative called 'Stroomversnelling'. The construction of 11,000 zero energy homes got underway in 2016. These homes produce as much energy as they consume, leading to zero energy usage. The strategies include high-quality insulation, energy-efficient installations and renewable generation with on-site solar panels. The aim is to have a total of 4.5 million zero energy homes by 2050. So the pace must be stepped up.

Within Alliander, we are pursuing innovative solutions to facilitate the energy transition. As local generation continues to increase, autonomous systems will become more commonplace. Examples are the energy supply on the 'Marker Wadden' islands, which we studied in 2016, and the island network at Schoteroog, which was ultimately called off.

The Marker Wadden are islands in the Marker lake that are currently being constructed, primarily to restore the flora and fauna in the lake. The Society for the Preservation of Nature (Natuurmonumenten) has received the government concession to create and manage the islands. In 2016, we teamed up with Natuurmonumenten to discover how we could supply renewable energy to the future buildings on the island, such as the port and the research centre.

Another project in 2016 was the Schoteroog island near Haarlem. We developed a plan for an autonomous island network for four local businesses. The absence of a traditional connection between the island network and the existing energy network meant we had to think out of the box. Local arrangements were necessary with parties who produce, store, distribute, consume and balance energy. Unfortunately, during the preparations in 2016, it proved impossible to find a solution that reconciled the intentions of the concept with existing laws and regulations.

Matching supply and demand of electricity is becoming increasingly difficult. Storage is one solution that can help us manage peaks and troughs. The possibilities for storing energy are still limited, but we are closely monitoring the rapid advances in this area. We enter into partnerships and initiate pilot projects. One example in 2016 concerned the realisation of a local community energy storage battery. On sunny days, customers with solar panels feed their surpluses into our network. The problem is that our network cannot cope with the steadily growing amount of fed-in energy. The community battery is a local collective solution for solar overproduction. Consumers can store the energy they have generated in the central battery for later use. The first pilots with this local community battery are scheduled for 2017.

Solar and wind energy is increasingly being generated locally. More and more people are also making sustainable choices, such as electric vehicles or heat pumps. This affects the design of the local network, says project manager Moniek Thissen of Alliander. “How do we deal with energy shortfalls and surpluses? Upgrading the network is not always desirable. Another solution is to encourage consumers to opt for flexible and smart energy management. We used the USEF (Universal Smart Energy Framework) market model for the first time in a smart testbed project ("Energiekoplopers").

During the smart testbed pilot in Heerhugowaard, we tried out a new market model for flexible energy trading. “USEF facilitates flexible trading based on multiple defined roles. We studied the value USEF can offer each party in this model.” Until the end of 2016, the model was extensively tested in Sun City (Stad van de Zon), a sustainable neighbourhood with lots of rooftop panels and zero energy homes. Thissen: “Over 200 households were equipped with a smart device for using electricity flexibly. For instance, the device instructs electric boilers to heat up extra warm water when the sun shines. This creates a warm water buffer that can be used later in the day.” The pilot was a success: flexible usage prevents severe congestion in the network and, as such, is valuable for the network operator. The project also provided insight into the interaction between all market participants. “For one thing, it became clear that consumers are happy to contribute to flexible usage, provided it is convenient and hassle-free. All we need to create a fully-fledged market is an intermediary between the supply and demand of energy, but this intermediary should be able to deliver the desired flexibility.”

The pilot helps the government, commercial partners and the sector to take the next step towards the future. “Once we actually start building the model, the challenge will become tangible,” says Thissen. “Having done this on a small scale, we now want to roll out the flexible concept in the new national Dynamo project. With more participants and more local differences. By starting small and expanding step by step, we aim to build a bridge from testbed to open market.”