Alternative infrastructures are increasingly being set up and Alliander is investing in their development. Examples are heating networks and microgrids. It is crucial that the new infrastructure is accessible ("open") to everyone, both customers and suppliers, on equal terms and that the user is free to select the supplier.

Sustainable energy facilities such as electric transport, heat pumps and solar panels typically use direct current (DC). DC must be converted into alternating current before being fed into the power network. To save the energy lost in this process, Alliander is working on a solution for a direct connection between these facilities and a DC network. In Lelystad we installed the first-ever public DC station in Europe. The station constitutes the heart of the future DC network for the Lelystad Airport Businesspark and the new Lelystad Airport. The station will offer connected businesses an efficient supply for their DC-powered operational installations and facilities. In addition, the connected companies can generate and share power without relying on the traditional alternating current network. Alliander wants to use this network to examine whether a public DC network can supplement the traditional alternating current network and the role this can play in the transition to a sustainable energy system.

Alliander, the municipality of Zaanstad, housing associations and the energy supplier have signed a letter of intent to develop a heating network in Zaandam-Oost. The network uses residual heating that is released during the production process of companies such as the AEB waste and energy recycling company in Amsterdam and possibly a small-scale biomass plant to be built near the ZMC (Zaandam Medical Centre).

Alliander has also teamed up with the municipality of Arnhem to encourage the use of residual heating. In 2017, we worked on the plans for a new northern branch of the local heating network at Arnhem. These new plans provide for the transportation of residual heating through a new heating transport pipeline from the waste processing centre at Duiven to customers in Arnhem-Noord. Thanks to the collaborative structure, multiple suppliers will be able to supply heating from the northern branch (Arnhem-Noordtak) to customers located along the route.

The impact of heating networks and biogas mains

Interest in the local generation and distribution of renewable energy is on the rise. This is partly due to the thriving economy, but is also being driven by the Paris climate agreements. Alliander DGO is seeking to facilitate this expansion through the realisation of open networks for the transmission and distribution of renewable and local energy, including heating and green gas. To achieve this aim, this subsidiary is working with other stakeholders such as companies, public authorities and end users.

In 2017, three projects developed by DGO where operational. In Nijmegen 4,800 homes were connected to a heating network. This network transports heating from a nearby waste processing centre to homes, thus eliminating the need for a gas-fired boiler.
In Eerbeek, a biogas pipeline was constructed between the IWE water treatment plant and the DS Smith paper mill. During the purification of process water, biogas is extracted from the organic material. This solution enables the factory to use biogas from the IWE location instead of natural gas. In addition, the Hermitage Museum and Botanical Garden in Amsterdam are connected to each other with a thermal energy storage installation. The network makes it possible to use heating from the Hermitage Museum in the greenhouses of the Botanical Garden. With this solution, less natural gas is used for heating and the museum requires less electricity for cooling.

Each of the three projects has an impact on diverse types of capital, including the development of new knowledge and expertise and impact on local residents. These projects make a considerable contribution towards the reduction of air pollution and greenhouse gas emissions. For this reason, the 2017 impact measurement of these projects was calculated on the basis of natural capital. The environmental impact of DGO projects in 2017 is shown in the illustration below.

Explanation: the impact of the Nijmegen heating transmission network was calculated on the basis of 2016 figures. The CO2 reduction for 2017 is expected to be higher due to an increase in the number of connected homes.

The year 2017 saw the definitive breakthrough of electric transport. The Dutch coalition agreement states that all new cars must be emission-free by 2030. Virtually all car manufacturers are expected to launch electric-only vehicles in the coming years. A range above 300 km will become standard, making electric cars an attractive alternative for consumers. The number of electric-only cars increased by some 8,000 last year. To advance the development of e-transport, it is crucial to discover how an e-charging infrastructure can be fitted in, making optimal use of and without overloading the existing electricity networks (see box: Amsterdam pilot), while also making socially responsible choices. Through our subsidiary Allego, we are working on an open e-charging infrastructure that is accessible to everyone. In 2017, Allego expanded the e-charging network to 5,000 charging points in the Netherlands and 7,000 internationally. This makes the company a major supplier of rapid e-charging solutions for electric vehicles. In addition, Allego is developing services and products for electric transport in partnership with Shell, BMW and Microsoft. Early in 2018, Alliander announced that preparations were underway for the sale of Allego.

Number of e-charging stations in the Netherlands

Arnhem is the first municipality in the Netherlands to realise a large-scale smart e-charging plaza for public use. Located at the Trans car park, this e-charging plaza can accommodate 16 vehicles simultaneously and is equipped with software to adjust the vehicle's electricity demand to the available power supply. E-drivers can use an app to see whether charging points are available and to charge their car, without requiring a special e-charging card.

In November 2017, ‘Vehicle to Grid’ e-charging stations were placed in Amsterdam as part of the City-Zen programme. Electric neighbourhood vans now form an integral part of the electricity and flexibility network.

Vehicle to Grid is a new e-charging technology for electric cars. As well as charging the vehicle, this technology can also feed electricity into the network. With the feed-in function we can respond to energy generation peaks and meet spikes in local demand for electricity. In this way the car acts both as a means of transport and as a home-based or neighbourhood battery.

Through the City-Zen programme Alliander is helping to create the city of the future. We are exploring how innovative technologies and applications can contribute to the sustainability objectives of a large city like Amsterdam. We look at the effects that solar panels, electric cars and home batteries have on the energy network. Together with residents, the municipality and all other local stakeholders, we are driving innovation forward in a district in Amsterdam. Vehicle to Grid may help us achieve a better balance between solar demand and supply. In this way, renewable energy can be used optimally without the energy network being overloaded. 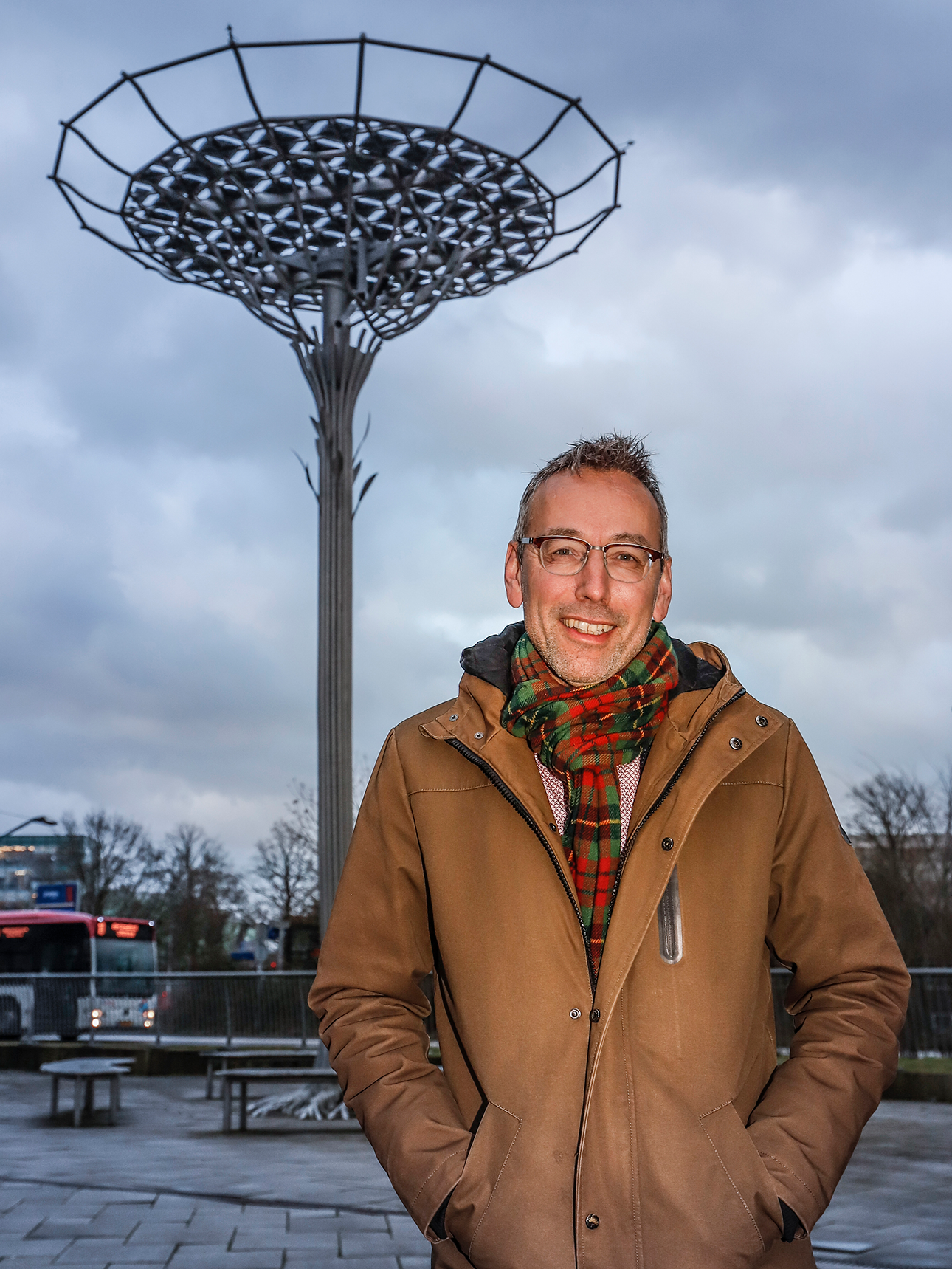 Jan van der Meer is heating coordinator in the Arnhem-Nijmegen region. His job is to help municipalities drive the energy transition, with a strong focus on renewable heating. The former councillor of Nijmegen says speed is of the essence: “We have 32 years to get rid of natural gas. That may sound like plenty of time, but it isn't.”

The new cabinet is stepping up its energy transition efforts. And not before time, according to Van der Meer. “This year, all sorts of agreements will be concluded such as a new energy agreement and an administrative agreement for the energy transition. The province must take the lead." Concrete plans for financial contributions from the government must be put forward, he says, particularly for the heating transition. Despite the urgency of the challenge, he has not yet seen a single fully-fledged neighbourhood plan for ditching natural gas and going all-electric. “One neighbourhood in Nijmegen, Hengstdal, has tentatively outlined a strategy for gradually making homes natural gas-free,” he adds. “Households are being advised to continue investing in non-regret insulation measures and in 2030 - when the natural gas network must be replaced - everyone in that neighbourhood must be heat pump-ready.”

This suggests that the heating transition is something for the long haul, but it isn't. Van der Meer does some calculations: “We have 32 years to get rid of natural gas in the built-up environment. Assuming that it will take eight years to wean a neighbourhood off natural gas, a city like Nijmegen will have to do two districts a year. This means that the council must designate eight neighbourhoods for the transition during its next term. In short, we must get this area-based approach underway very soon.” Cities that are fortunate enough to have a heating source and a collective heating network, such as Arnhem and Nijmegen, can go faster. Together with housing associations, these cities can start looking for districts and neighbourhoods that are suitable for connection to the heating network. “These are typically areas with lots of high-rise and housing association ownership. Note incidentally that when housing associations decide they want the heating network in a district, they also give households in that district a choice: collective heating or all-electric. Arnhem already has a heating network covering most of the city. Now, it is just a question of expanding.“

Van der Meer sees that housing associations and households are inclined to put off investments because they expect better or cheaper solutions to become available at some later time. “Over the next 32 years, streets everywhere will be opened up: to remove gas networks, place heating networks and upgrade electricity networks. We won't be able to do all that in the final ten years. Waiting must not be rewarded. The government should come up with an incentive, such as a subsidy to reward first-adopter districts. And they shouldn't skimp either – the offer they make is often just not quite enough". Alliander is a logical partner for municipalities, says Van der Meer. “Alliander must indicate where the natural gas networks need to be replaced in the coming years. The municipality must then determine the strategy, together with the network operator, housing associations and residents. So Alliander is a key player here and should tackle this role even more vigorously. The construction of gas networks in new-build areas should really be a big no-no, because it just makes the problem worse and will saddle residents with high costs somewhere down the line.“